Andrew and I have developed this blog as a way to not only document our wedding and the planning of it for our own pleasure, but also to share ideas about how to have a wedding that remixes the traditional, the modern, the personal and the practical. As much as possible, we want to make every detail of our wedding meaningful to us and reflective of our understanding of marriage and our commitment to each other and the world we live in. The more we talked about it, the more it became apparent that we wanted a wedding that maintained the basic traditional elements of ceremony and celebration, but delivered in a way that made sense to us and our lives. Enjoy and feel free to comment! 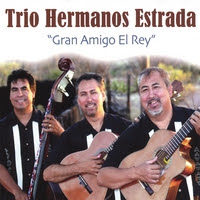 At first we wanted Mariachis; I particularly wanted an all-female thirty piece Mariachi band clad in pink like I saw open a Lila Downs concert, but alas, we couldn't afford that.

We took our time eating and drinking repeatedly at Guadalajara Grill (good), La Fuente (mediocre), and Las Casuelitas (just had the flan, but it was awesome). We loved Mariachi Saldivar, but we also heard Mariachi Mixteca, which wasn't bad, but not our thing. I have one key song that I use to judge how I like a Mariachi band, and it's "No Volvere". We had a trio - Trio Hermanos Estrada - play it one night at La Fuente, just for kicks. They blew it out of the water. I didn't even know I wanted a trio until I heard them.

We took their card and bought their CD "Gran Amigo El Rey" dedicated to the memory of their dear friend who had died of cancer. In the liner notes it begins, "About fifteen years ago, we were fortunate to meet Mark Capin, who was accompanied by a beautiful woman, for whom he asked us to play several songs. A few days later he requested more songs, but this time they were for another beautiful woman...and then another...and another..." Sexist, I know. But how quickly that little liner note pulls you into the story of these characters: a womanizing southwestern cowboy and three Mexican musicians!

Needless to say, the CD sounds as good as they do live. We met the trio later at Guadalajara Grill, and decided on "Novia Mia" as the "wedding march". It will be surreal having them playing for us at our wedding.

After the trio goes home, the DJ starts heating it up! Andrew and I have actually already mixed an eclectic four hours of music,(everything from Ella Fitzgerald to Chemical Brothers), but we'll be sure to carve a slot for DJ Cresencio to bust out his Latin beats. When I was a clueless first semester graduate student three years ago, I would have never guessed the same grad student who was coaching me through day one would be deejaying my wedding one day! (I was so confused I kept referring to him as Constancio.) Thanks so much Cresencio and Jose!
Posted by Eva at 5:51 PM